Something happens as you grow older. You become aware that some see you as having certain wisdom to share, while others believe you are too old or forgetful to have anything of value to offer.

When it comes to journeying with Spinal Cord Injury over many years, what actually happens, is that despite many believing you have great wisdom and insight into this life and its complexities, in reality, that apparent ‘wisdom’ is thwarted by the mysteries: The things you don’t know, which just seem to deepen and increase!

Over time one thing has become clear to me: Each para or quad we have ever met in person or whose story we’ve read has a unique set of experiences and SCI conditions (although I concede there are a few which are common to most), but ALL have, at times, what I call incidences of the ‘mysteries of SCI’. If you happen to find you are completely clear on your partner or family members’ SCI and all it entails, maybe you have no need to read on.

From my perspective of 47 years of acting as an SCI mystery detective/investigator, I would have to say I find this the most frustrating and anxiety-inducing aspect of loving someone with SCI. Anders is 48 years post-injury. An injury that nearly took his life and resulted in T3 complete paraplegia. After five months of hospitalisation in 1973, with some of the legends of RNSH, Sydney’s medical finest, he was sent out into the world to live a new and different life.

MOVING FORWARD with SCI is always a challenge. At 23, he saw it as an adventure, and he set out to prove he could not only conquer this life but also live his best life. To a degree, he has been very successful in achieving these goals. Finding a wife within the next two years to join this adventure and being told it would be child-free with shortened life expectancy, we wanted to make each day, each year, count!

Fortunately, some predictions were way off the mark. Three children, ‘sort of’ naturally conceived (LOL), celebrating at 35 with a ‘half-dead’ party as he believed he would defeat the shortened life expectancy and make 70 .. and has, ticking that one off last year. At the same time, bladder/bowel challenges came our way, some more serious than others (bladder cancer and bowel abscess, all were ultimately successfully treated). Episodes of AD, the odd fracture of ankles, wear and tear on originally injured shoulders and the ongoing, often violent, spasms that he was convinced were good for his circulation became the norm.

Always lurking, however, with its agenda to rob and spoil life, was a nasty critter called ‘nerve pain’. Mysterious in its nature, we never know where it originates, why it moves around, how it’s triggered and why some days does it magically disappear only to roar back into life at the most inconvenient time. Often accompanied by its sidekick, ‘nausea’ / ‘feeling off’, there seems few answers for those who seek them, despite the caring concern of specialists and therapists.

I can’t tell you how often I’ve had to explain why I am attending a wedding alone or cancelling a dinner out. I eventually got into a habit of saying ‘no’ before ‘yes’. Telling our children (when much younger) why the plans they have looked forward to now won’t include dad was always the hardest. Why can’t dad make their formal, dance concert or school musical? Why do we find ourselves staying home for our anniversary, birthdays’ etc.?

Over the years, one moment really stands out. A few years ago, our daughter, with tears in her eyes, was begging God to make it a good health day so her dad could ‘wheel her down the aisle’. That this nasty critter, vaguely known as ‘nerve pain’ won’t spoil her special day. 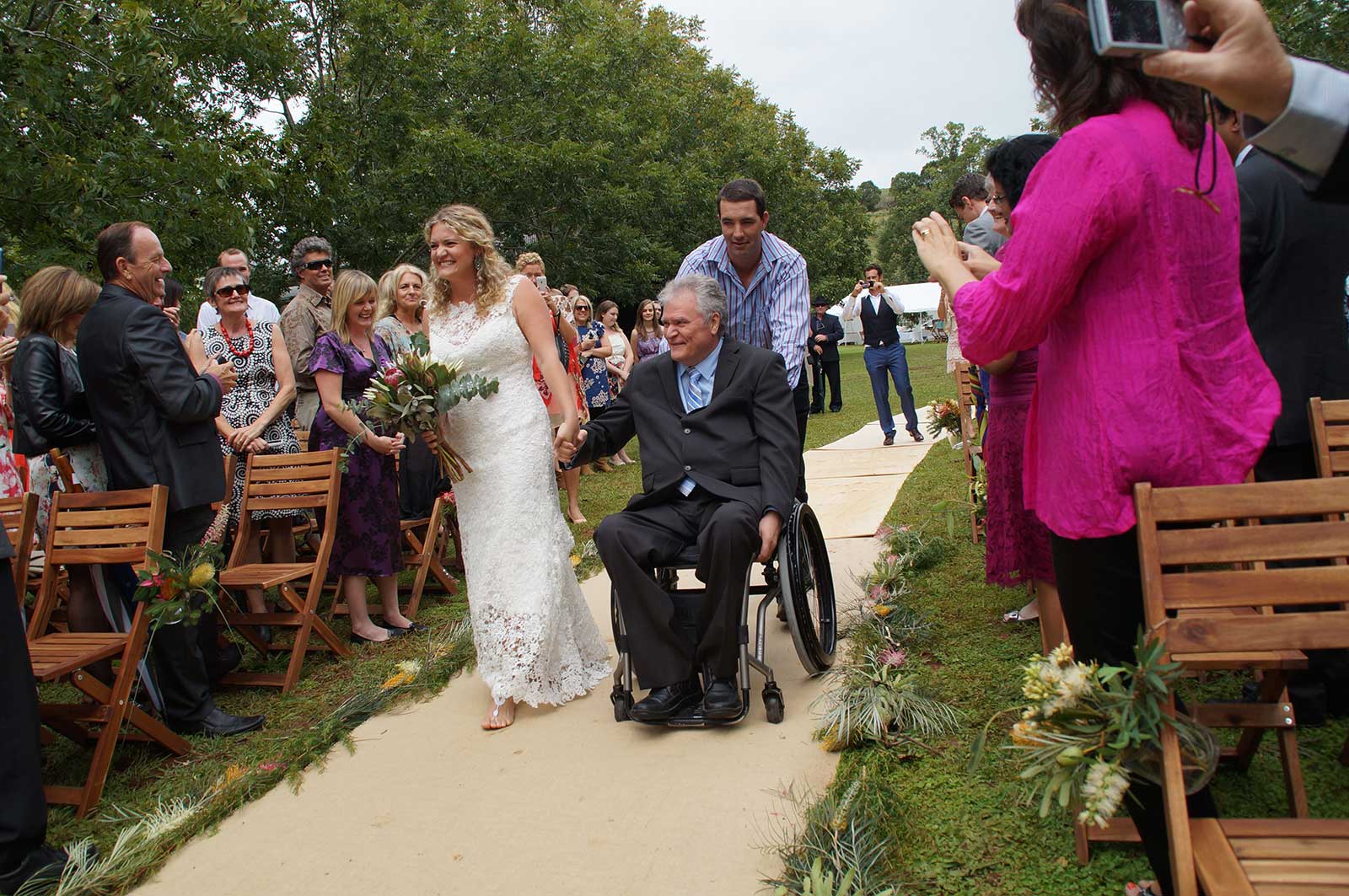 “How is Anders today?” Mmm, anyone else tired of trying to answer that question. Or the fact that it is asked every day by most people, family, friends and work colleagues? “So what is wrong? Why is he not able to come?” Again, what can I say? I never know how much to explain, especially when all I want to do is cry because yet again, an explanation is impossible, I don’t know, he doesn’t know and watching on is the most helpless of experiences.

This ‘mystery’ is our primary ‘mystery’. While it may not rob the quality of life for all SCI persons, it does seem to offer a massive challenge for many, those who live with it, and also those caring professionals who attempt to treat it. Not to remain gloomy, though, as life must continue!

We are constantly choosing to embrace and live the good days to the full, choosing always to be thankful. We’re celebrating being alive in 2021, a time where so many, even those living with SCI, have much to contend against. So, whether you identify or not with our particular mystery, know you are not alone as you find a way to embrace and overcome; always grateful for those who seek answers to SCI and move this community forward in treatments and breakthroughs!