Travelling the world with a wheelchair! - Forward Ability Support

Over five decades of living with my favourite para has involved the inevitable travel adventure. With it has come challenges that, while frustrating, strengthened our courage and perseverance.  As a note, this title is a teaser, given that we have only travelled overseas single digit times and certainly are still far from experiencing ‘the world.’ Still, even with travel being affected by the pandemic, we always dream of seeing more!! Travel has provided us with some hilarious moments and some injuries and certainly tested our resolve, causing us to work well as a family and a couple when launching into the unknown!

We braved our first journey on a cruise ship, of all places. It was 1984, and I was expecting our third child.

We stayed in the ‘accessible room’ where we quickly realised that Anders couldn’t fit his wheelchair through the door!

We needed the maintenance crew to take the cabin door off its hinges to enter and exit the cabin. As you can expect, this became very tedious and ultimately meant that Anders would opt to stay in rather than go through the process every time he needed the bathroom. 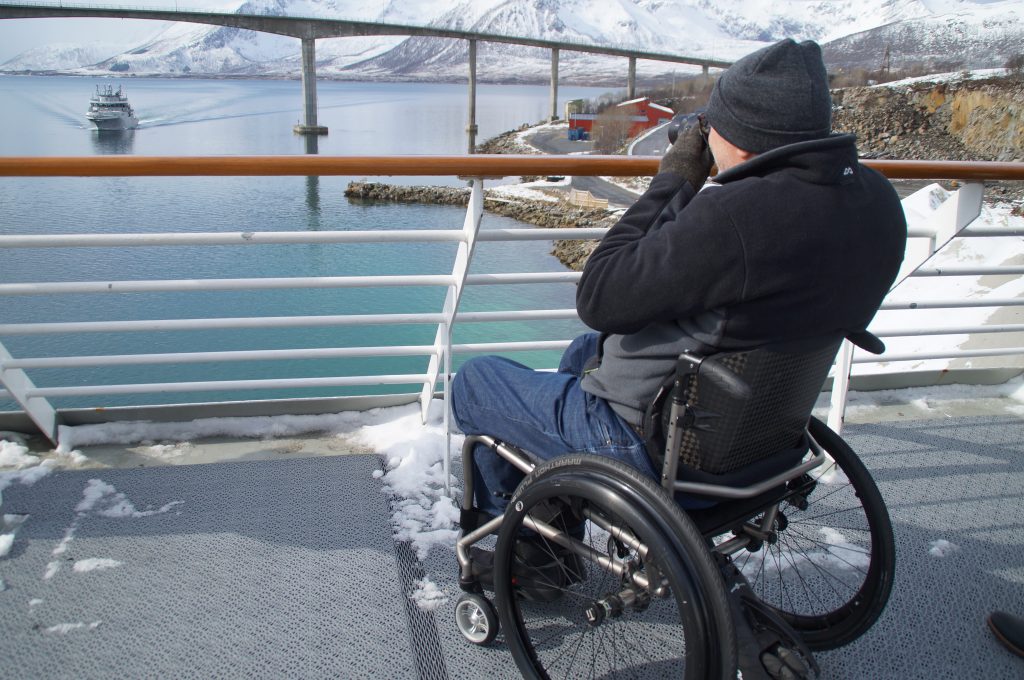 Besides, there were copious raised sections (bulkheads) around the ship to negotiate – not friendly to wheeling around the decks! Shore excursions back then were not worth the effort, so while Anders would mind our little ones, I would explore the dock and local markets. I am seldom, even now, without one or two cameras, and I have thousands of photos. We share them at the end of every trip, often through tears as I reminisce on the things I saw and did alone, wishing he was there with me.

We decided to give cruising a miss after that.

In 1986 Anders was asked to speak at a conference in the USA for business people. Once there, we had planned to travel together on a 2 ½ week road trip from Los Angeles (after the obligatory Disneyland visit for the then 2, 7 & 9-years-olds), up through the Sierra Nevada mountains, into Yosemite via the Tioga Pass and then up to Virginia City.

We quickly discovered that most bathrooms didn’t work despite our best research, and we had to ‘adapt’ – most places would have been appalled at how that occurred in their rooms and will remain out of print!! Times pre-Google, or the existence of travel agents for people with disabilities, meant spending hours communicating by landline to settle on flights and hire vehicles with hand controls. Anders, being blessed with a wife who had never flown or driven overseas and who was a ridiculously nervous driver, promised that I would never have to drive. 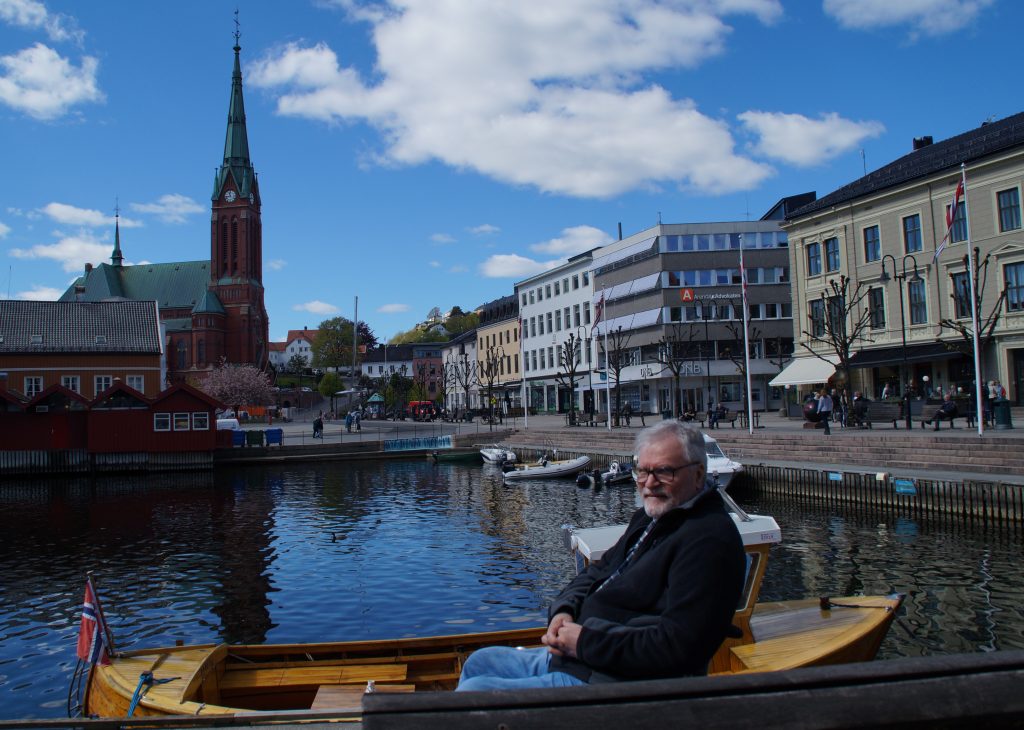 However, he did insist I should have an international driver’s licence ‘in case of an emergency’. That emergency hit immediately at the car hire place when the hand control hire vehicle turned out to be a sporty two-door. Their reason being that ‘the only people who need a vehicle with a hand control are young single vets who don’t have a family.’ Despite fruitlessly negotiating for a family vehicle with hand control, we had to accept that I would be the only one driving.

And yes, if you’re wondering, we discovered how strong a team we could be.

Anders supported me as I negotiated my way through LA freeways and tackled the one-way Tioga Pass with no guardrails. Throughout every trip, my husband has been a saint, an excellent navigator, cheering me on, helping me believe in myself while managing not to make too many shrieks of fear!!

The most notorious trip of all was perhaps our getaway to Bangkok – a business trade fair this time. This trip nearly became my last. We began our journey with Anders sitting in an airline wheelchair as we patiently waited for our wheelchair to arrive at the terminal. The staff had politely told us numerous times that ours was on the way, but it wasn’t long before the truth finally came out that the chair was, in fact, on its way to Frankfurt!!!

To make matters worse, the airport staff told us that we could not borrow a wheelchair, even for the few hours of the trade fair. It was hours before we could convince the airport staff that Anders could not walk, and he needed a chair. We finally forced our way out of the airport to find a (regular) taxi, with no seat belts, lifts, etc., just brute strength from the taxi driver, who could load Anders up and drive to the accommodation. We discovered language and lack of understanding of Spinal Cord Injury were huge in that trip to Thailand (it took three days to get his chair back).

Indeed, times are changing, and improvements are being put in place every day; however, it is still significantly difficult, despite careful planning, not to encounter unwelcome ‘surprises,’ handling challenges and ignorance.

We have learned to do the very best due diligence we can before travelling. When things go ‘pear-shaped,’ and they still do, we try to stay polite and realise that most people are trying to help us and that kindness and understanding seem to work to bring out in others the responses we need. 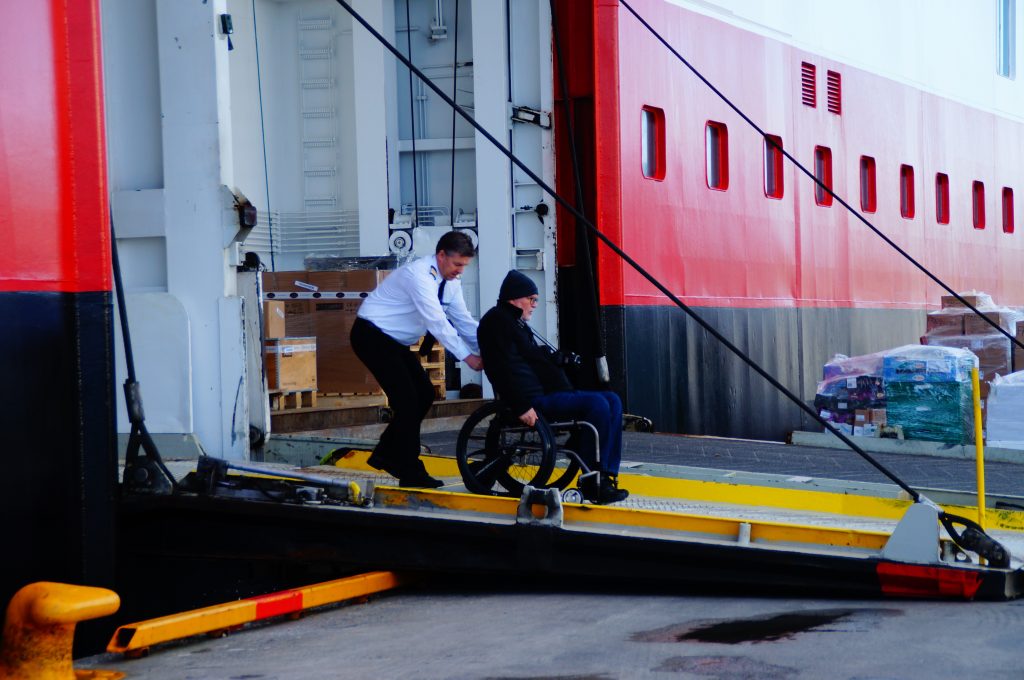 There are exceptions, of course, and frustration is usually aired privately or through the appropriate channels. On one occasion, a disgruntled customer took a particular domestic airline to the Human Rights Commission (a story for another day) due to neglect and lack of care. In contrast, we forgave a separate domestic airline for breaking Anders’ foot through ignorance rather than deliberate carelessness!

Our most recent and perhaps most memorable trip to Norway in May 2019 deserves a whole story of its own. So, Part 2 of travelling as an older couple with a wheelchair will be coming soon, and yes, the picture is a teaser, and yes, we are in the Arctic Circle airport of Kirkenes where Anders was unloaded the old-fashioned way!!!!